I have been through TSW twice in my life.

The first time was about 15 years ago in 2004 and 2005 when I was about 14 years old and had used topical steroid creams on and off for about two years.

At that time my condition was extremely bad and when I was outside I was always stared at and was even called a monster. Not only were my face and limbs affected but also my nipples and vagina. They were literally dripping yellow fluid. I needed to wrap myself like a mummy before wearing clothes, no one would sit next to me on public transport etc.

Long story short, at that time what I was told by my doctor was that I was only having bad and recurrent eczema and I just needed to use topical steroid creams to control it. However as all you know in Topical Steroid Withdrawal, using topical steroids does not help. It just made the eczema even worse every time I stopped. I had thought about committing suicide. I was very scared that this was something else. I always wondered if it was real eczema or if I was having some kind of rare illness? Why was other people’s eczema not like mine? Why had I followed the prescription from my doctor but my condition was so much worse?

I was too fed up with going to the doctors and my eczema came back even worse so I just gave up on myself and on spending money to visit the dermatologist again. And something magical happened after I stopped using topical steroids. I was still very bad for some time, but then I started to get better. Apart from weeping, I shed a lot at that time. I slept on the floor just to make cleaning and sweeping easier. As far as I remember, it took about two years and my condition improved a lot. I did not know that it might be due to my stopping topical steroids. I even thought it was the Chinese black magic that healed me lol (My parents had brought me to temple and got me to drink some spirit water to heal me).

From 2008 to 2016 I was the eczema girl among my friends and family. With hand eczema I struggled to work in the hospital as a nurse. It was very embarrassing and I used topical steroids to control the condition. However in October 2016 when I traveled back to the UK from Hong Kong, my skin got worse in just 10 hours. The dosage and the topical steroid that I used to use was no longer helping and I was very panicked. I searched on the internet and I found out about Topical Steroid Addiction. It reminded me of my ‘very bad uncontrollable eczema’ 15 years earlier and then I suddenly realized that it was not eczema, that it has been Topical Steroid Addiction!

Ever since I found out about TSA in 2016, I was dedicated to withdrawing from topical steroids because I knew that as long as I was tough enough I could get through this and with loads of information to dig in online, I truly believed it was just a matter of time. The most important thing is that I read about ITSAN and Dr. Rapaport’s YouTube video made me clear about the reason behind TSA.

It all started with my hands and inner elbow, then my neck and a little bit on my face. Then my whole arms became raw and red. To be frank, I think my healing went quite well when compared to others. I am not sure if it is because it was the second time going through Topical Steroid Withdrawal or because most of the time I was doing Moisture Withdrawal. Also at my worst I was on a raw diet and avoided nightshades, dairy, gluten and refined sugar.

Months three to four were my worst and at about month six I could live like normal again.  At about month ten I could say I was healed. After TSW I took several allergy tests. At last I found out I was allergic to artificial fragrance. If I had known this 10 years ago I would not have had to use steroids to control my hand eczema, let alone undergo Topical Steroid Withdrawal.

After undergoing TSW and finding out the root origin of my eczema, I became very passionate about spreading the word to help more and more people know you do not need steroids to treat eczema. There is always a reason for your eczema and what you need to do is to find out the origin and that’s it.

I also have two multiple allergy kids. The elder one was born in 2016 and I did use steroids on him at that time. Unfortunately he also went through TSW. My younger child was born in 2018 and at that time I knew more about eczema and allergy. I did not use any medication on her and I was able to find out the allergen cause and she also healed beautifully!

I fully healed from TSW by mid 2017, however I am allergic to artificial fragrance so if I come across artificial fragrance I still have a mild reaction on my hands. As long as I am avoiding them then I can say I am eczema free. During TSW my worst areas were my arms and hands that were so swollen. I could not even hold my young kids. Now I am cuddling my children and enjoying life as much as I can, because when undergoing TSW for some time and you cannot even get out of your bed, you realize we should not take things for granted!

Once again I would like to say a big thank you to the ITSAN team for advocating about Topical Steroid Addiction and Topical Steroid Withdrawal. I would not have today without ITSAN. 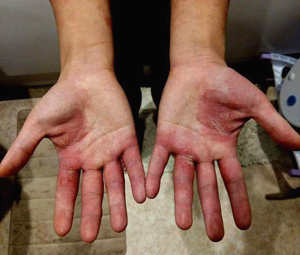