Many who go through Topical Steroid Withdrawal become hyper-sensitive to skin care products  – even those that previously were used with no ill effect. This was true for me – within a couple of weeks of stopping steroids, I could no longer use my go-to moisturizer, Cetaphil cream. My skin became unbearably tight so I searched for products that would be better tolerated. After some extensive research I landed on the following ingredients and developed a cream that was a staple through the most severe time of my experience. I hope you find them useful as well. 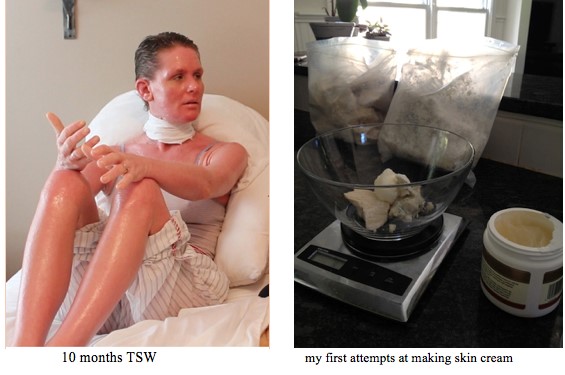 The following is a list of the ingredients I have found to work the best for me during this time of withdrawal and recovery:

Expeller pressed and refined by heating, this butter is made from the shelled kernels of the mango tree. It helps to generate skin cell renewal and prevent wrinkle formation. Mango butter is full of antioxidants, Vitamins A, B, high amounts of C, D and E, along with calcium, iron and magnesium. It is rich with essential fatty acids consisting of, stearic, oleic (46%), and linoleic (unsaturated Omega-6 fatty acid). With a natural SPF of 2-4 it also helps to protect from UV damage.

I have found this butter to be the closest softening agent to Vaseline in comparison to all other oils and butters. It also is very gentle to the skin and provides long lasting moisturization.

This butter is made from crushing and boiling the kernels of the Karite tree (known as the Tree of Life) in western Africa. It has been used for centuries because of its superior moisturizing and healing capabilities due to the presence of several fatty acids and plant sterols, namely oleic, stearic, palmitic and linolenic acids. Shea butter has also been shown to be an anti-inflammatory agent, to enhance capillary circulation and even prevent the growth of tumors. It contains high levels of Vitamins A, E, F and K, which help to revitalize and protect the skin from premature aging and also to boost collagen. Along with mango butter, it also has a small SPF to offer extra sun protection.

As I mentioned previously, entering into the withdrawal phase I wasn’t able to use shea butter.  After a couple of months I began to add it to the cream I made and no longer had any issues with it. I find it great to use as a secondary butter in mixes. Alone it can feel a little gritty and seems to disappear quickly into the skin.

Cocoa Butter is made from pressing the roasted seeds of the Cacao tree. It is greatly effective in fighting and neutralizing free radicals due to its high levels of antioxidants. Cocoa Butter contains polyphenols, a substance that has been shown to inhibit the production of the immunoglobulin IgE which is known to aggravate symptoms of both dermatitis and asthma.  Research also indicates that cocoa polyphenols are effective in suppressing the hyper activity of the T-cells in the immune system. Cocoa butter is also known to improve elasticity in the skin by enhancing elastin and collagen production, increasing hydration by creating a thin barrier over the skin while still allowing it to breathe. Full of Vitamins A, C, E and K, cocoa butter additionally contains many bioavailable minerals such as calcium, potassium, magnesium, zinc, manganese, copper and iron. Similar to shea and mango butter, it too has a good amount of essential fatty acids such as oleic (Omega 9), palmitic, stearic, and linoleic (Omega 6).

Besides all of its health benefits, cocoa butter smells great! Alone I find it good for use on dry cracked hands, but because it is hard to spread at room temperature, I like to include it in a cream for all-over body use.

Coconut oil comes from the pressing of dried or fresh coconut meat. It’s been used for thousands of years for its many health benefits internally and externally. Very soothing to itchy skin, coconut oil is also a good remedy for dandruff and flaky skin. It can be used as a natural deodorant. Due to its great amount of lauric, capric and caprylic acid, it is a highly effective antiviral, antifungal and antibacterial agent beneficial in the treatment of diaper rash, athlete’s foot, ringworm and even an infestation of lice. In addition to reducing bacterial colonization of the skin, which is common in eczema, it has been shown to decrease inflammation while protecting the skin’s barrier function. Furthermore, coconut oil contains ferulic acid and p-coumaric acid which have been proven to be strong natural anti-oxidants, combating premature aging and wrinkling of the skin as a result of the effect of free-radicals.

Because coconut oil is so light, almost watery, I find on troubled skin (while in the withdrawal period) it is best used combined with thicker and more substantial butters. When my skin is normal, it is the perfect after-shower light moisturizer, restoring hydration and pH balance for a healthy acid mantle.

Castor Oil comes from the pressing of the Castor seed. A native to India, the castor plant has been used for the healing qualities in its oil since ancient times. Although the plant contains the potently toxic substance ricin, the castor oil itself is harmless. This unusual oil is made up 90% by a unique fatty acid called ricinoleic acid, which exerts analgesic and anti-inflammatory effects. It also is antifungal and antibacterial. Because castor oil mimics the sebum in our own skin, it is easily absorbed and utilized. According to traditional medicine, castor oil has been used to treat skin disorders, abrasions, burns, sunburns, lesions, and a variety of skin problems.  In Ayurvedic medicine it is prescribed to stimulate the lymph system and alleviate fluid retention.

As a humectant, castor oil helps to attract moisture to skin.  It provides a nice glide when added to creams and salves and keeps the skin moisturized for a long time.

Hemp oil is obtained by pressing the seeds of the Cannabis plant. Only trace amounts of THC, the psychoactive element present in the Cannabis plant, exist in the oil. It is highly nutritional due to the fact that its 3:1 ratio of Omega 6 and Omega 3 essential fatty acids match the balance required by the human body. It also contains gamma linolenic acid (Omega 9) that is lacking in skin with eczema, so this oil is great to take internally as well as topically. It is believed to stimulate the growth of hair and nails, improve the health of the skin and reduce inflammation. Because it oxidizes quickly, keep hemp oil in the refrigerator.

This oil has a nice feel as is. It absorbs quickly and leaves a dry finish. I like to use it on my face or in creams. As the essential fatty acids in hemp oil will lose their nutritional value if heated, the oil needs to be added to creams once they are at room temperature.

Jojoba oil is actually a liquid wax that is cold pressed from the seeds of the Jojoba shrub, native to the Sonoran desert. It is a non-greasy oil with a pleasant smell and has a variety of cosmetic uses; some of which include face cleansing, a treatment for acne, and moisturizing of the skin, hair, and cuticles. As this oil is so similar to the natural sebum secreted by our own skin, it is readily absorbed and utilized to help nourish and revitalize the skin making it soft and supple.  Keeping the skin more pliable and elastic, this oil has also been shown to reduce fine lines and wrinkles. It is antifungal, anti-bacterial and can be used to control mildew. Jojoba oil is also anti-inflammatory and so is helpful in treating skin injury.

Used as a surfactant in creams, beeswax provides a thin, protective barrier over the skin keeping pollutants out and hydration in while still allowing the skin to breathe. Beeswax is also known to be anti-inflammatory, antiviral and antibacterial. It is a humectant, drawing moisture to the skin and locking it in. Containing Vitamin A it also may soften and rehydrate skin along with aiding in cell reconstruction.

Only a little bit of beeswax is needed in formulations. If too much is added it can start to build up on the skin on reapplication.

The Calendula (pot marigold) flower in the form of an oil infusion or extract has been used throughout history in the treatment of dry and damaged skin. It accelerates wound healing by improving neovascularization, the growth of new capillaries, in tissue. It also promotes skin regeneration because of its antiseptic and anti-inflammatory properties and is often used to soothe sunburn, rashes, insect bites and other skin irritations. In addition, Calendula is used to prevent premature aging and thinning of the skin due to UV damage, and has also been shown to relieve symptoms of hemorrhoids. It is gentle enough to be used on babies with skin irritation or diaper rash.

According to a study done in France, over 250 patients who underwent surgery for breast cancer were randomized to receive either calendula or trolamine, a routine treatment for topical application during postoperative radiation therapy. The occurrence of grade 2 or higher acute dermatitis was significantly lower (41% v 63%) in patients who used calendula compared to those who used trolamine. Furthermore, patients receiving calendula had less frequent interruption of radiotherapy and significantly reduced radiation-induced pain.

The potency of a Calendula oil is determined by the color; the deeper the orange color, the more potent the infusion. I found it was much more cost effective to make my own oil infusion and I preferred to have it in a base of sweet almond oil instead of the usual base of olive oil that it comes in. You can buy 1 lb bags of dry Calendula flowers online. To make your own infusion, fill a glass jar halfway with the dry flowers and pour over the oil of your choice until the flowers are fully submerged. Cover with a lid and sit in a sunny window for 3-4 weeks. Strain the oil into a clean glass jar, cover and store in a dark place. Use within a year.

a couple of drops of essential oil (optional)

Weigh out and combine the butters and beeswax in a double boiler over medium heat. Gently melt, stirring occasionally. While butters melt, weigh out and combine the castor oil, jojoba oil and coconut/calendula oil in a small bowl. When butters are completely melted, remove from heat (make sure the mixture doesn’t come to a boil!) and strain into a glass jar. Stir every so often until the butter mixture resembles thick frosting. Slowly add the castor, jojoba and coconut/calendula oils and stir. Add essential oil if desired. Again, stir occasionally until the cream resembles thick frosting. It will come to its true consistency after a few hours or overnight.  This amount lasted me about a week when taking 3-4 baths a day. *Note:  make sure to always patch-test ingredients before using them over your whole body. Essential oils should be tested in a carrier oil and not used directly on the skin as they can cause major irritation due to their level of concentration.

Wishing you all the best and healing inside and out. 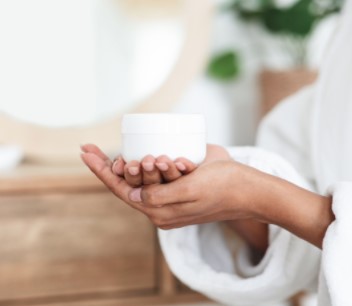